Powerful Papercuts: Online Exhibition of Monika Krajewska’s “Burning” Cycle (2003-2020), a requiem for the Jewish world destroyed in the Shoah 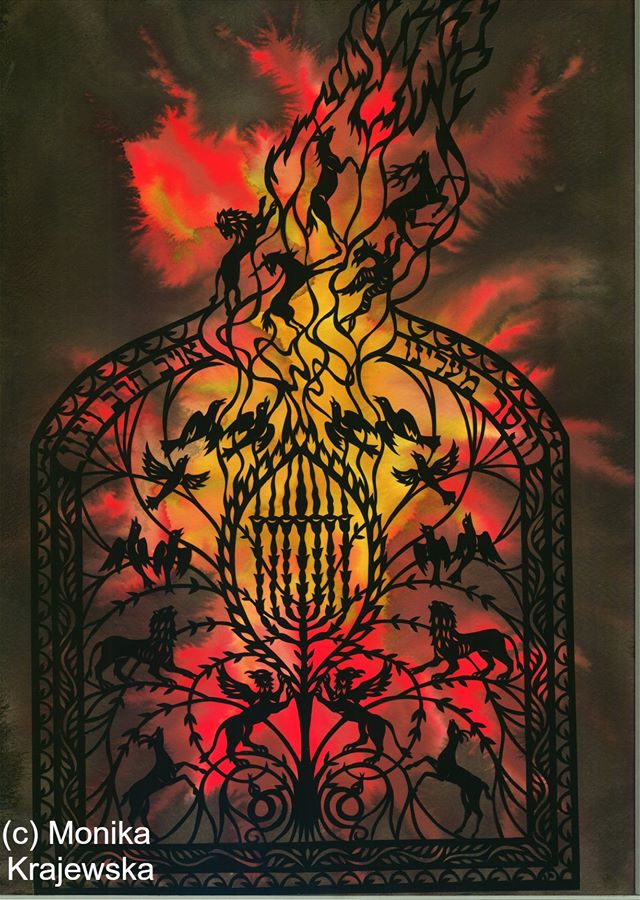 Burning XII – Shield us from sword and fire, 2015* Text: “Shield us from foe, plague, sword, famine and anguish”, from the Hashkiveinu prayer.*

We are privileged to host this online exhibition of work by the artist Monika Krajewska. They are drawn from her extraordinary cycle of papercuts called “Burning,” a commemoration of the physical destruction of the Shoah.

“Burning” is my requiem for the synagogues and ceremonial objects destroyed together with the communities that created and cherished them. If even synagogues and cemeteries were doomed, what was the fate of Torah scrolls, candelabra, books and fragile papercuts? Only slivers survived.

Krajewska, who lives in Warsaw, is an accomplished photographer who was a pioneer in researching and documenting Jewish cemeteries and other built heritage in Poland. Her books of photographs of Jewish cemeteries, Time of Stones (1982) and A Tribe of Stones (1993), were ground-breaking in the field. Today, her photographs and papercuts are in synagogues, museums, and private collections. In her work she employs the symbolism and iconography found on gravestones and in synagogues in her contemporary interpretation of the traditional Jewish papercut form.

In my papercuts, I often draw on my favorite motifs from wooden synagogues, their imagery painted or chiselled in wood, on symbolic tombstone reliefs I had recorded as a photographer, mizrah plaques for the eastern wall, as well as other Jewish texts and symbols.

In this series, the meticulously cut pieces were later torn, stained, burnt. I thought about the artists, whose “holy work”, reflecting the world shaped by the Torah, rabbinical lore and Jewish folk tradition, was doomed for destruction.

The papercuts entitled “From the Cinders” and “From the Ashes” were inspired by a real-life story:

S. An-ski, the writer, social activist and ethnographer, was visiting Galician shtetlach ravaged during World War I, as an emissary of Jewish Relief organizations. In the town of Dębica, in a damaged synagogue, he found a fragment of the Ten Commandments on which only the words “…Kill” and “…Commit Adultery” remained.

He kept this memento of devastation till the end of his life.