The Institute for Polish-Jewish Studies has again organised an inspiring range of events to remind us of the rich legacy of Jewish life in Poland, and in Eastern Europe more generally. Lectures, book launches, workshops and the annual conference to launch the new volume of Polin. Studies in Polish Jewry bring the state of the art in this field to a London audience. I very much look forward to join these events, most of which will also be accessible from further afield by computer. 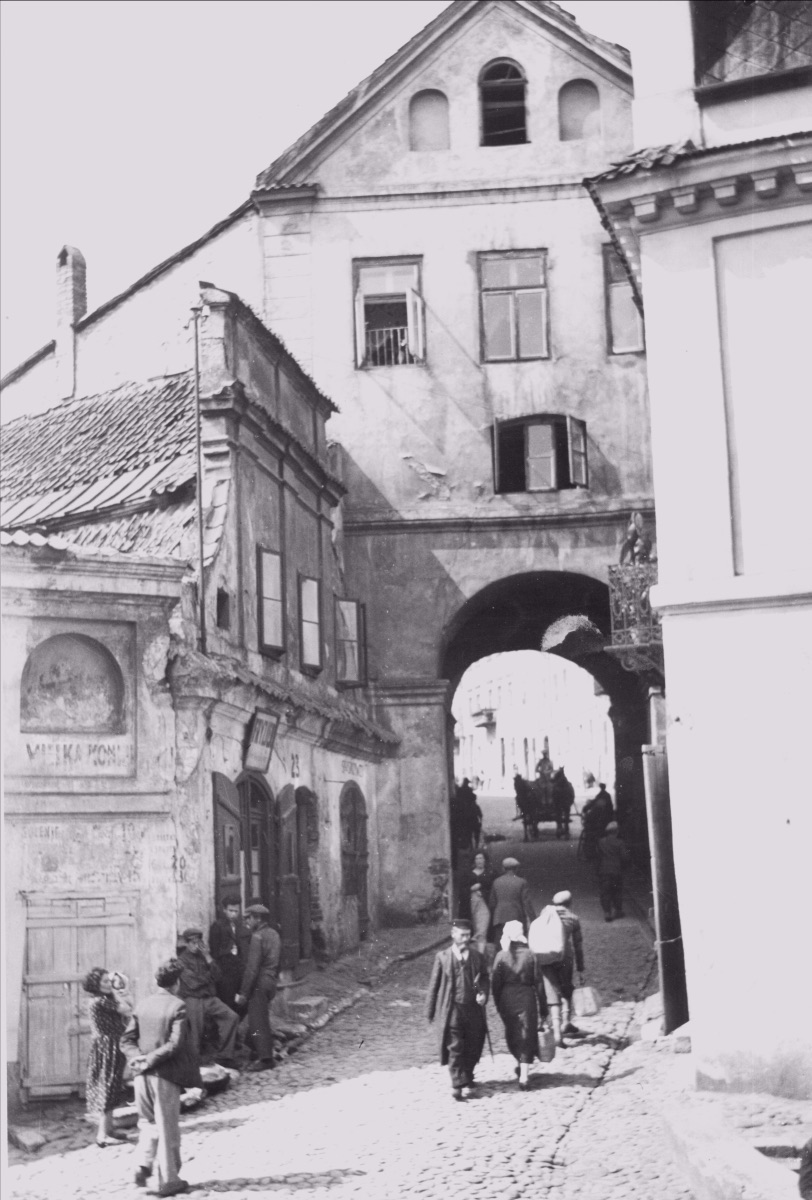 Last year's postponed event returns, with Agnes Kaposi in conversation with our IPJS Chair, François Guesnet. Agnes Kaposi, born in 1932 to a Hungarian-Jewish and socialist family, survived Debrecen ghetto and labour camps in Austria, and left Hungary for England after the 1956 uprising to work as an industrial and academic researcher in the Telecommunication and Computer industries. Agnes is a Churchill Fellow and the third woman elected as Fellow of the Royal Academy of Engineering.

Marc Volovici: German as a Jewish Problem In his recent book publication German as a Jewish Problem, Marc Volovici (Birkbeck College) explores the multilingual nature of the Jewish national sphere in Central and Eastern Europe, and the centrality of the German language within it. He argues that it is impossible to understand the histories of modern Hebrew and Yiddish without situating them in relation to German - a hypothesis we look forward to probe.

Marc Volovici is a Leverhulme Early Career Fellow at the Department of History, Classics and Archaeology and the Pears Institute for the Study of Antisemitism at Birkbeck, University of London. He received his PhD in 2017 from Princeton University, and his research interests lie in Jewish nationalism, European intellectual history, Israel/Palestine, and antisemitism. Marc’s book, German as a Jewish Problem: The Language Politics of Jewish Nationalism, has been recently published with Stanford University Press. He served as an academic advisor and co-edited the exhibition catalogue for the exhibition ‘Jews, Money, Myth’, staged at the Jewish Museum London in 2019.

Michael L. Miller is a professor of history and nationalism studies at Central European University in Budapest and Vienna, and co-founder of its Jewish Studies program. He received his PhD in History from Columbia University, where he specialized in Jewish and Central European History. Michael’s research focuses on the impact of nationality conflicts on the religious, cultural, and political development of Central European Jewry in the nineteenth and twentieth centuries. His articles have appeared in Slavic Review, Austrian History Yearbook, Simon Dubnow Institute Yearbook, Múlt és Jövő and The Jewish Quarterly Review. Miller’s book, Rabbis and Revolution: The Jews of Moravia in the Age of Emancipation, was published by Stanford University Press in 2011.

It appeared in Czech translation as Moravští Židé v době emancipace (Nakladatelství Lidové noviny, 2015). He is one of the authors of Zwischen Prag und Nikolsburg: Leben in den böhmishcen Ländern (Vandenhoeck & Ruprecht, 2019), which will appear in English as Prague and Beyond: Jews in the Bohemian Lands (University of Pennsylvania Press, 20201). He is currently working on a history of Hungarian Jewry, titled Manovill: A Tale of Two Hungarys. Chair: François Guesnet (UCL)

Of Chicken and Eggs: Jewish Political Agency in the Context of Jewish Self-Government in the Polish Lands IPJS Chair François Guesnet in discussion with IPJS Founder and Vice-President Antony Polonsky.

Jewish self-government in the Polish lands has since long been recognised as one of the defining features of the Eastern European Jewish experience. In this lecture, François Guesnet will first reflect on the origin of some of the most salient features of the Jewish community in Eastern Europe, such as the strong position of the community board (kahal) and regional and national representation in Councils (va'adim), in the medieval and early modern period. He will then explore to which degree this specific encounter shaped ideas and practices about political leadership and agency in later periods. François Guesnet is Professor in Modern Jewish History in the Department of Hebrew and Jewish Studies at University College London. He is also the Chair of the Institute for Polish-Jewish Studies, and the co-chair of the editorial board of Polin: Studies in Polish Jewry. He holds a PhD in Modern History from Albert-Ludwigs-Universität, Freiburg im Breisgau, and specializes in the early modern and 19th century history of Eastern European, and more specifically, Polish Jews. He has published widely on Polish-Jewish history, and most recently contributed to the Cambridge History of Judaism, vol. VII (2018). His current areas of research include: Jewish political tradition (shtadlanut); Jewish autonomy in eastern Europe; Sir Moses Montefiore; history of antisemitism; and history of the body (Plica polonica).

Professor Antony Polonsky, Emeritus Professor, Brandeis University, and founder of the IPJS, was Albert Abramson Professor of Holocaust Studies since 1999, an appointment held jointly with the United States Holocaust Memorial Museum. He has also been a visiting professor at the University of Warsaw, the Institute for the Human Sciences, Vienna and the University of Cape Town, Skirball visiting fellow at the Oxford Centre for Hebrew and Jewish Studies, Senior Associate Member of Saint Antony’s College, Oxford and Honorary Research Fellow at University College, London.

11 January 2021, 9:30am - 5pm - with JW3, Embassy of the Republic of Poland, the Polish Cultural Institute and UCL's Institute of Jewish Studies, and on zoom:

Launch of POLIN vol. 33, "Jewish Religious Life in Eastern Europe" The conference will engage with the rich offerings of this most recent volume of Polin. Studies in Polish Jewry, edited by Ada Rapoport-Albert – who passed away prematurely earlier this year – and Marcin Wodziński, adopts a fresh understanding of Jewish religious life in Poland. It probes new approaches to the history of hasidism, women’s religious practice, and a focus on the beliefs and practices of ordinary people. Reappraisals of religious responses to secularization and modernity, both liberal and Orthodox, offer more nuanced insights into this key issue. Other research areas represented here include the material history of Jewish religious life in eastern Europe and the shift of emphasis from theology to praxis in the search for the defining quality of religious experience. Not to be missed!

Dr Brendan McGeever is Lecturer in the Sociology of Racialization and Antisemitism at Birkbeck, University of London and a Research Associate at the Pears Institute. His book Antisemitism and the Russian Revolution (Cambridge University Press, 2019) was awarded the 2020 Reginald Zelnik Book Prize for History, and an ‘Honourable Mention’ for the W. Bruce Lincoln Prize. He is a 2019 BBC/AHRC ‘New Generation Thinker’.

Dr. Elissa Bemporad is the author of Becoming Soviet Jews: The Bolshevik Experiment in Minsk (Indiana University Press, 2013), winner of the National Jewish Book Award and of the Fraenkel Prize in Contemporary History, and finalist of the Jordan Schnitzer Prize in Modern Jewish History.

Dvorah Vogel: Yiddish Modernist Poetry with Dr Anastasya Lyubas, and Dr Iryna Starovoyt, and with Dr Uilleam Blacker, Chair. Dvorah Vogel (1900-1942) was an often overlooked but important figure in the constellation of avantguarde European writing of the interwar period. She considered Yiddish as central vehicle for her modernist writing experiments. Anastasya Lyubas (Binghampton College) introduces us to the strikingly original prose experiments inspired by photography and film and her Cubist poetry.

Dr Anastasya Lyubas, Ph.D. and MA, in Comparative Literature, Binghamton University; and MA in Linguistics and BA in English Language and Literature, Lviv National University, Ukraine. Her doctoral dissertation was on “Language and Plasticity in Debora Vogel’s Modernist Poetics,” and her postdoctoral work advances plasticity as a theoretical and philosophical framework in the work of Debora Vogel, Gertrude Stein and Elizabeth Smart, in Toronto. Iryna Starovoyt is a poet, essayist, and Associate Professor of Cultural Studies at the Ukrainian Catholic University. Born in Lviv, Ukraine, her poetry debut book No Longer Limpid (1997) placed her within the new generation of writers since Ukraine's independence. Dr Uilleam Blacker is lecturer in comparative East European culture, School of Slavonic and East European Studies, University College London. His research interests are the literatures and cultures of Ukraine and Poland and cultural memory in eastern Europe. He has published widely on Ukrainian, Polish and Russian literature and culture, and has also translated the work of several contemporary Ukrainian writers.

The Legacy of the Shtetl: Investigating Polish-Belarusian-Ukrainian Borderlands with Dr Magdalena Waligórska (Humboldt University, Berlin), and Dr Natalia Romik (Warsaw), respondent. Magdalena Waligórska takes us on a journey to the Polish-Ukrainian-Belorusian borderlands where she explores small towns which had a predominantly Jewish population before the Second World War and the Holocaust. Here, Jewish property both entirely fell under the control of the new ethnic majority and remained a “disinherited heritage” (Tunbridge and Ashworth) that continues to cause dissonance and psychological discomfort to its current “heirs.” The unsettling presence of Jewish ruins, resurfacing human remains, walled-in objects, collapsing cellars, and the recycled tombstones constitutes an “intrusion of the past into the present” (Rothberg) that, decades after the war, still demands action and results in different local responses. The respondent, Natalia Romik, is an artist, urban historian, and architect from Warsaw who has undertaken similar but different explorations of the Jewish heritage in small Polish towns.

Magdalena Waligórska is a cultural historian and sociologist; fields of interest include contemporary Polish and Belarusian history, Jewish heritage and popular culture, Jewish/non-Jewish relations, music and identity, and memory studies.

The Jews in the Band: Anders Army's Special Troups Speaker: Dr Beth Holmgren (Duke University) Beth Holmgren shares fascinating insights about Jews in the entertainment troupes of the Anders Army. She will focus on the history of the most enduring product of a cooperation between Alfred Schütz, a Jewish composer, and Feliks Konarski, a writer, who together created the iconic 'Czerwone maki na Monte Cassino' (The Red Poppies on Monte Cassino), memorializing Polish losses in the taking of the monastery of this fortress held by German troups.

This symposium will bring together senior scholars of the Holocaust with the authors of significant recent studies in this area. It will reflect on archaeological investigations, the voice of witnesses and survivors, but also present-day contextualisations of engaging with the mass murder of the Jews of Europe. It is organised in cooperation with the Wiener Library on the occasion of the 80th birthday of Professor Antony Polonsky.

The Rebellion of the Daughters - Young Jewish Women and Their Religious Attitudes in Galicia around 1900 with Professor Rachel Manekin (University of Maryland, College Park) and Professor François Guesnet (London), chair.

In her recent book, Rachel Manekin explores the spike in conversions among young Jewish women in Galicia around 1900. She found that the educational gender gap and intergenerational conflict were at the heart of this radical step. Manekin also discusses the belated Orthodox response and argues that these educational innovations not only kept Orthodox Jewish women within the fold but also foreclosed their opportunities for higher education.

Rachel Manekin (PhD, Hebrew University of Jerusalem) works on the social, political, and cultural history of Galician Jewry, and the policies of the Habsburg Empire towards the Jews. She recently published Religion, Politics and the Constitutional Monarchy: The Struggle Over the Control of the Jewish Communities in Galicia, 1848-1883 (Jerusalem: Zalman Shazar Center for Jewish History, 2015) and The Rebellion of the Daughters. Jewish women runaways in Habsburg Galicia (Princeton: Princeton UP, 2020).

In this third edition of engaging with the rich and complex genealogical legacy of Eastern European Jewish communities, we plant to focus on the reconstruction of family histories reaching back many generations, and to hear from those who have successfully uncovered their deep roots in Eastern Europe. The workshop will also allow to discuss with professional genealogists and expert historians how such a quest can be undertaken. Organisers: Susan Storring and François Guesnet Ticket prices to be announced closer to the event.