NOW AVAILABLE! ICCJ-Book: "Enabling Dialogue about the Land: A Resource Book for Jews and Christians"

Edited by Philip A. Cunningham, Ruth Langer and Jesper Svartvik

Enabling Dialogue About the Land comprises essays from 16 contributing scholars who engaged for several years in the “Promise, Land, and Hope” research project of the International Council for Christians and Jews (ICCJ), headquartered in Heppenheim, Germany. 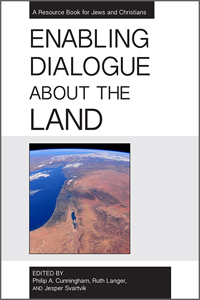 The team of American, Australian, German, Israeli, Palestinian, and Swedish scholars sought to answer: “What understandings might the project develop that could serve as resources for constructive dialogue about Israeli-Palestinian issues?” This book is the result of their research and field testing of a dialogue process they named “Partners in Hope,” which is meant to resource groups of Christians and Jews who gather for discussion in academic and congregational settings, including the ICCJ’s 38 member groups in 32 countries.

While not intending to “solve” the Israeli-Palestinian conflict, Enabling Dialogue encourages interreligious conversation that moves away from endless disputes over policies toward engaging with differences as a path toward constructive understanding.

The book has been published by Paulist Press and is available here.

The ICCJ is proud and delighted to announce its newest published resource with an interview of the editors:

A webinar on the topical part of the book and an interactive workshop on the didactical material related to the included resources are planned to be held in the first quarter of next year. More information will follow in due time.