Source: The Times of Israel

This has nothing to do with Sheikh Jarrah 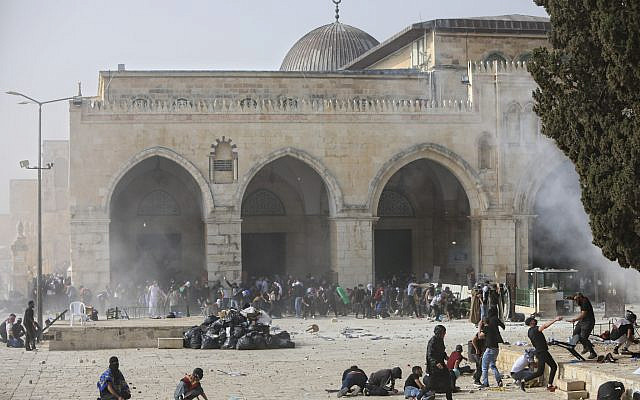 Palestinians clash with Israeli security forces in the Temple Mount compound in Jerusalem's Old City, May 10, 2021. (Mahmoud Illean/AP) The Times of Israel

As I write this, rockets are raining down on Israel from Gaza, and protests are being instigated in cities throughout the country. People have already died as a result of this senseless violence and more will surely follow in the next few days. As a Palestinian living in Jerusalem, I am frustrated and angry — and I can only blame Hamas. The fanatics who rule over Gaza with an iron first cannot resist the opportunity to stir up anti-Jewish violence for their own political gain. If innocent Jews and Muslims die in the process, all the better for them.

The pretext for the latest missile barrage and social media incitement is Sheikh Jarrah, where a long-running legal dispute was scheduled for a court hearing. This had been a private matter between Jews who have an old property deed from the 1800s and the residents of four homes who have lived there for decades and do not want to pay rent. It is the kind of situation that should be handled by a local municipal court. This could happen in any other country and there would be no public interest. But this is Jerusalem, so you have to view everything in the context of the political situation. You also have to ask yourself: who stands to gain from political violence right now?

After Palestinian PM Mahmoud Abbas canceled highly anticipated elections, Hamas simply saw an opportunity it could not pass up, exploiting the Sheikh Jarrah situation and an already tense environment during the holy day of Leylat Al Qadr and Jerusalem Day. Hamas is currently running a social media campaign calling for Palestinians to incite violence during demonstrations in Jerusalem and elsewhere. They are encouraging Palestinian youth to throw their lives away by hurling rocks and makeshift bombs at police.

Hamas-led riots outside of the Al Aqsa Mosque prove that Israeli police are not at fault for the dangers preventing Muslims from praying. Hamas has incited mobs and provoked violence with the intention of framing Israel for ethnic cleansing. Just today, provocateurs filled several busses to travel to Jerusalem to participate in the "historic" riots and answer the Hamas call to incite violence.

Most significantly, Hamas leaders ordered hundreds of rockets to be launched in the general direction of major Israeli cities. Many of them did this from the comfort of their luxury villas in Doha, Damascus, or elsewhere, knowing full well they themselves are safe from any blowback. It is important to remember that Hamas's penchant for murder is almost matched by their blundering incompetence, which is partly the reason one out of every three of their rockets crashes into Gaza where the only possible victims are Palestinian. They also apparently shelled Abu Ghosh, an ancient Arab village.

This dispute is not actually about four houses in East Jerusalem. This is about Hamas seeing a chance to seize the narrative and increase its own influence and control over Palestinians in Jerusalem. Don't buy their fake news and let them dilute their own blame. In the coming days, Jews and Muslims are both likely to die because Hamas saw political upside in violence. Don't forget it.