The Holocaust & the Exile of Yiddish: A History of the Algemeyne Entsiklopedye

This event is co-organised with UCL's Institute of Jewish Studies

The Holocaust & the Exile of Yiddish: A History of the Algemeyne Entsiklopedye 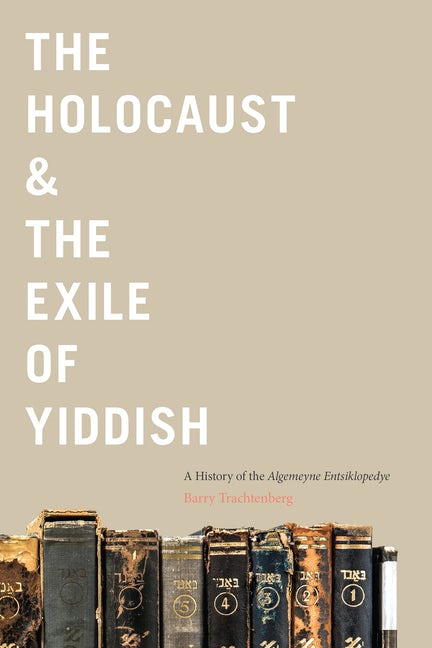 In the early 1930s in Berlin, Germany, a group of Eastern European Jewish intellectuals embarked upon a project to transform the lives of millions of Yiddish-speaking Jews around the world. Their goal was to publish a popular and comprehensive Yiddish language encyclopedia of general knowledge that would serve for its readers as a bridge to the modern world and as a guide to navigate their way within it. However, soon after the Algemeyne entsiklopedye (General Encyclopedia) was announced, Hitler’s 1933 rise to power forced its editors to flee to Paris and then again to New York in 1940. Throughout this time, and until the final volume was completed in 1966, the mission of the Entsiklopedye constantly shifted in response to the ever-changing circumstances of Yiddish-speaking Jewry.

The Holocaust & the Exile of Yiddish untangles the complicated saga of the Algemeyne entsiklopedye. As its editors continued to publish volumes and revise the encyclopedia’s mission, their primary audience of Eastern European Jews faced persecution and genocide under Nazi rule, and then the challenge of reestablishing themselves in the first decades after World War II. Historian Barry Trachtenberg reveals how, over the course of the middle decades of the twentieth century, the project sparked tremendous controversy in Jewish cultural and political circles, which debated what the purpose of a Yiddish encyclopedia should be, as well as what knowledge and perspectives it should contain. Nevertheless, this is not only a story about destruction and trauma, but also one of tenacity and continuity, as the encyclopedia’s compilers strove to preserve the heritage of Yiddish culture, to document its near-total extermination in the Holocaust, and to chart its path into the future.

Barry Trachtenberg is the Rubin Presidential Chair of Jewish History at Wake Forest University in North Carolina. He is the author of the Revolutionary Roots of Modern Yiddish (Syracuse, 2008), The United States and the Nazi Holocaust: Race, Refuge, and Remembrance (Bloomsbury, 2018); and The Holocaust & the Exile of Yiddish: A History of the Algemeyne Entsiklopedye (Rutgers, 2022).

Sonia Gollance is Lecturer in Yiddish at University College London. She is a scholar of Yiddish Studies and German-Jewish Literature whose work focuses on dance, theatre, and gender. She received her PhD in Germanic Languages and Literatures from the University of Pennsylvania and has taught previously at the University of Vienna, The Ohio State University, and the University of Göttingen. Her first book, It Could Lead to Dancing: Mixed-Sex Dancing and Jewish Modernity, was published by Stanford University Press in May 2021.

François Guesnet is Professor of Modern Jewish History at University College London. He specializes in Eastern European Jewish History and is co-chair of the editorial board of Polin: Studies in Polish Jewry. His book publications include Polnische Juden im 19. Jahrhundert (Vienna, Cologne, 1998), and, as editor, Warsaw. The Jewish Metropolis (2015, paperback 2017). He also co-edited the collected volume Sources on Jewish Self-Government in the Polish Lands from Its Inception to the Present (Boston, Leiden: 2022).

Registration is free via Eventbrite. Please click the REGISTER and fill in your details on the Eventbrite site. Once you have registered, you will receive your Zoom link with your Eventbrite confirmation. This zoom link will be sent to you once again just before the lecture takes place.

Please consider making a donation to the IPJS, to help us continue to provide programmes such as this. Just click the DONATE button below.